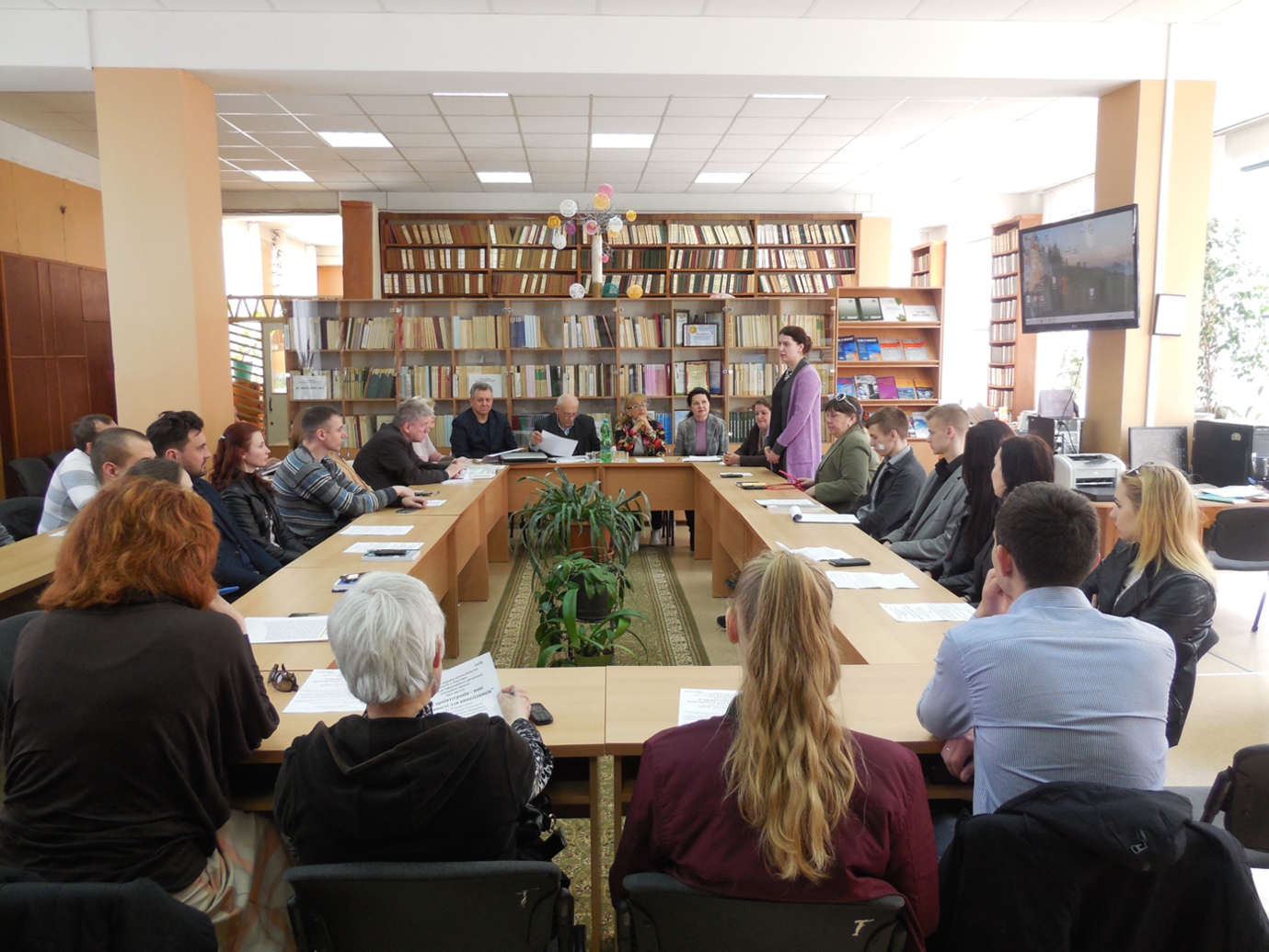 V.G. Prokhorova, the VIP Department Supervisor, opened the meeting and congratulated the event attendants with the International Day of Intellectual Property, which is observed annually in Ukraine. She stressed that this event at KhGNB has become a tradition, and informed that the purpose of the event was to announce the results of the contest "Young innovators in the Kharkiv Region" held with the participation of the Kharkiv Regional Council of the Society of Inventors and Innovators, the goal of which is to promote the engineering creativity of Kharkiv's youth.

In his introductory speech, Ye.S. Stognii, the Round Table facilitator, staff member of LLC INVENTA, patent agent of Ukraine, dwelled on the significance of the system of protection of intellectual property (IP) for ensuring technical progress worldwide. He stressed that the World Organisation of Intellectual Property (WOIP) is the world leader in disseminating new knowledge and proliferation of concepts in IP development. WOIP supports the protection of IP rights in many countries worldwide, including Ukraine.

Next, Ye.V. Kunitsa, PhD, delivered a welcoming speech on behalf of the Council of Young Scientists with the Kharkiv Regional State Administration. She spoke about State Administration plans focused on developing the research potential of creative youth. The task of the regional contest held in 2016/2017 under the auspices of the State Administration was to spur creativity of young scientists, and search for and identify innovation projects aimed at resolving topical issues in the Slobozhanshchina region.

I.B. Gagauz, Director of the Kharkiv Technological Centre, presented the report "Ukraine's participation in International Programs for supporting science and innovation. The trends of the recent three years". In her speech, she dwelled on the implementation of the European "Horizon – 2020" program focused to developing science and innovation in Ukraine. The total program budget is 80 billion Euro. Funding is allocated in three key areas: advanced science, industrial leadership and social development. The grants for the winners of the contest held within the framework of the "Horizon – 2020" program are allocated to scientific research and cover up to 100% of the costs for non-commercial organisations and up to 70% of the costs for commercial enterprises. The funding scheme provides for two phases: the first (maximum 50,000 Euro) is for preparing the project and presenting it for further review. The second phase implies conducting scientific research and making a prototype or demonstration model (several million Euro).

Thus, the Ukrainian company Politede won a grant of 1.22 million Euro. This example is not unique. During 2014-2017, Ukraine submitted 715 projects to the contest to 269 million Euro. Of these projects, 61 were selected and were awarded funding to 11.5 million Euro. This is roughly 50% of the annual budget allocated to science in Ukraine. In particular, among the higher education establishments in Kharkiv, the contest winners were two projects prepared at the N.Ye. Zhukovskii National Aerospace University (KhAI), and one at the Kharkiv National Economic University (KhIIT).

In winding up her report, I.B. Gagauz encouraged to boost outreach activities among the scientists and inventors community in Kharkiv to increase the number of participants of the contest involved in the "Horizon – 2020" European program. 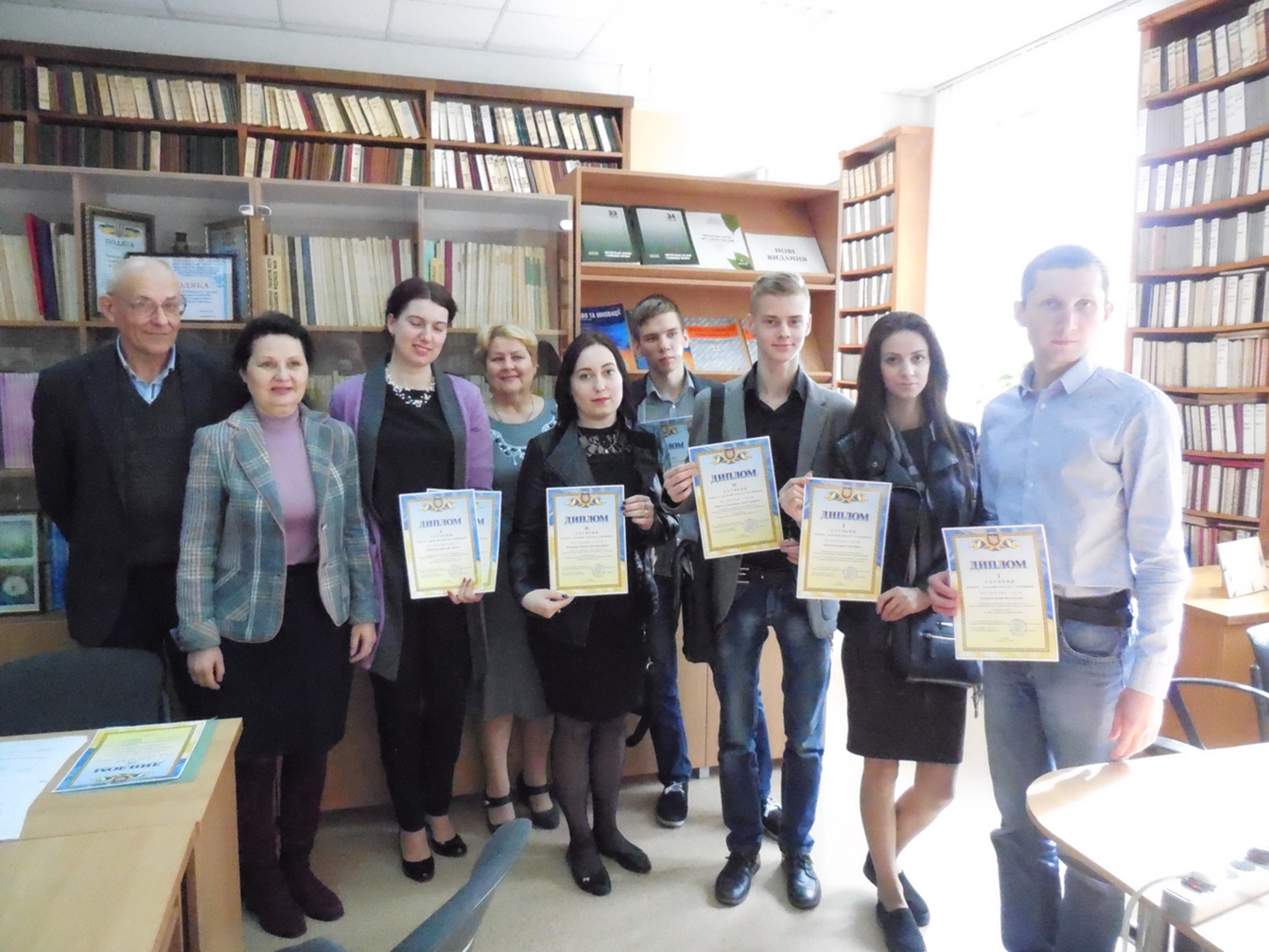 V.V. Lukianchenko, Director General of LLC Inmaisters, delivered a report "Inventors in Ukraine – a hurdle race". He dwelled on such inventor's incentives as a desire to achieve results, leave one's trace in history and defend a dissertation. To solve any of these problems, the key point is goal setting, without which achieving something is outright impossible. Hence, the goal for each inventor is to transforms one's dreams to reality.

Next, the speaker focused on that the financial potential for solving the problems posed is available and a way of acquiring the funds must be found. In particular, he said that, in 2014, the European Investment Bank, due to the sanctions imposed on Russia, suspended financing Russia and channelled the released funds of 5 billion Euro annually to funding research and innovation in Ukraine, Moldova, Georgia and other countries.

In addition, the Branch of the European Bank for Reconstruction and Development (EBRD), opened recently in Kharkiv, is demonstrating its interest in new developments in nano technologies and IT. Hence, Ukraine has many programs financed by the EU for the inventors to implement their concepts.

Representatives of higher education establishments, organisations and R&D institutes in Kharkiv and the Region took part in the contest. Among the winners were students and post-graduates from the Kharkiv National Automobile and Road University, Kharkiv Commerce and Economic Institute KhNTEU, Kharkiv National Academy of Municipal Economy, and young specialists from SC Ukrgazdobycha NAK NefteGazUkraina, LLC Inmaisters, and others.

The Contest winners were awarded with diplomas for pre-eminent works.